Show me directions to Kenneth Turner

As a child growing up in Bangor, Northern Ireland, Kenneth Turner always loved flowers and drew much of his future inspiration from his Grandfather's garden.
He was granted a scholarship to Greenmount Horticultural College in Ireland and afterwards studied Ornamental Horticulture at Reading University. It was whilst at Reading that Ken realised his real interest lay in the art of floral decorating. He obtained a job in Oxford as a flower seller in the market and then progressed to become a florist. His colleagues realised he had a real flair and persuaded him to move to London.

In 1970, he left Pulbrook and Gould to open his first retail shop in Avery Row in the heart of Mayfair. During the seventies and eighties, Kenneth and his team created visual extravaganzas for events such as the opening and dedication of the Sackler wing at the Metropolitan Museum of Art in New York and the Masked Ball in a Venetian Palazzo on the Grand Canal in Venice.

1986, Kenneth Turner created his signature fragrance ‘Original' – an outstanding fragrance which was formed from the wonderful floral smells that he inhaled whilst walking his dogs. The Original fragrance is still considered a bench mark classic in terms of lifestyle fragrance and is commonly referred to as the ‘Chanel No 5' of the home fragrance market. It is a unique blend of honeysuckle, the oil from the bark of the sweet poplar, lemon and orange oils, cloves and cinnamon.

In 1996, Kenneth Turner was awarded the Royal Warrant by His Royal Highness the Prince of Wales, as the exclusive supplier of fragrant candles and room fragrance. Kenneth Turner was the first home fragrance company to achieve this accolade. The Prince of Wales is a particular fan of Original. In addition, the company is proud to have included amongst its clients many of the European Royal Families, Heads of State and a glittering array of celebrities including Giorgio Armani, Donatella Versace, Sting, Cher, Lauren Bacall and Maria Schneider to name but a few.

In the nineties, Kenneth was appointed as the figurehead and expert of the Horehow Garden Catalogue, a division of Neiman Marcus, Dallas, which was delivered to four million homes twice a year.

In 2004, Kenneth Turner was selected as the exclusive florist in Harrods, fully reinforcing Kenneth Turner as an authority in floral decoration. More recently, Ken has been helping to develop the Kenneth Turner Distributor in Japan and visited Tokyo twice in 2007 to give masterclasses. These masterclasses were held in conjunction with the British Embassy in Tokyo.

Kenneth Turner became one of the world's leaders in the design and development of fresh, dried and preserved flowers and their arrangements. Kenneth Turner established a world reputation as an innovator in the use of these materials enhanced with fruit, vegetables, shells, driftwood and mosses.

Leave your review of Kenneth Turner 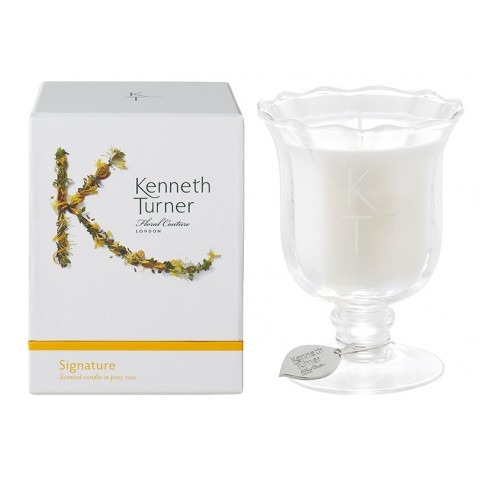