Tudor Rose supply and install uPVC Conservatories, Orangeries, Windows and Doors across the North West. We are designers of modern and traditional styles of uPVC Double Glazed Windows, uPVC Doors, Composite Doors, Conservatories and Orangeries to suit your home.

Tudor Rose are a FENSA registered (no. 16211) local family run company who don't compromise on quality or service. We are proud to provide and fit to the highest standard - windows, doors and conservatories at direct from factory prices.

Are you keen to have new windows and doors? Maybe you are thinking about a conservatory? But you're put off by the prospect of salesmen who won't take no for an answer and yet don't seem to grasp what you want? Then call us and find the solution to your problems.

This company went bankrupt in September 2013 yet a company is renting the premises and answers the phone as 'Tudor Rose'? The website is still up and running as of the 5/Nov/2013 which must illegal if the company no longer exists? I would steer clear completely.

Even though guaranteed return of deposit if didn't want to proceed - they have kept hold of our money saying we have to have something done by them ! We became very suspicious when proper plans /quote went at snail pace so wanted to pull out as per their t&c. However months later still no refund!

this firm is to be avoided at all cost!!! the building of my conservatory has been an absolute farce. the concrete base didnt set and had to be dug up and relaid, a wall tie wasnt put across the longest lengyh of the brickwork which had to be pulled down and built again. the brickwork was loose,and they were going to put the frame on top of it,knowing full well it was loose. underneath yhe sills wasnt sealed,the inside was sealed but was such a mess they were made to scrape it out and redo it.down the side was left a mess and they were made to flag it properly,all throughout this they were demanding money all the tine - i stopped one cheque untill they rectified the above.just when i though things couldnt get any worse they did.every single roof panel is full of condensation,which,they assure me,is perfectly normal for clear polycarb panels.after speaking with other simelar firms.i was informed that this is no way normal,amd that there was probably moisture in the panels when they were put up. the manufacturer was supposed to be coming to look at them. that was about 3 months ago,i am still waiting. so,you have been warned,do not use these cowboys. yes,everyone knows tudor rose all right!!!

In May 2007 windows were fitted to a property by Tudor Rose. In November 2007 I purchased the property. In January 2009 a Tudor Rose employee came out to fix my bathroom window (thank you) as per request. Late in 2009, I logged a complaint about mould on all windows, plus the previous issue which had returned, and also other issues. No-one will come and even look at the mess the windows installed by Tudor Rose has created, no-one has even had the decency to reply to a letter of complaint I have sent This is a matter for the National Press I think?.....Everyone will know Tudor Rose!

Just wanted to say thank you very much to all at Tudor Rose, excellant job and the serivce was second to none!!!

What can I say but thanx so much for the excellent job everyone has done (the connie is fantastic) Thanx again Julie & Andy Wood Bredbury, Stockport

Once again an excellent job done, we are 100% delighted with the conservatory. Everyone involved in the job worked well. Once again Thankyou for good service in all areas Yours faithfully Mr & Mrs McConell 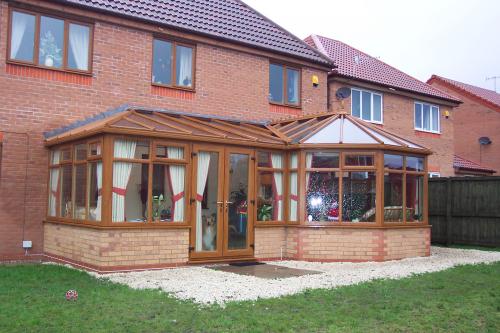