Show me directions to Wedding Films by Freezeframe

Why Choose Freezeframe as your Wedding Videographer?

... that is the question... After your big day all you will take away are some photos, possibly the dress and fading memories of the day. A specially created wedding film can bring the emotion and life back into those memories and is something every couple should book rather than consider an optional extra.

Wedding Films by Freezeframe are an award nominated professional, cinematic wedding video company, run by Paul Cryer. Paul is passionate about working with couples who will cherish what he creates for them.

Using a wide range of cinematic film techniques and expert editing, as a specialist wedding videographer, Paul captures your day and produces a stunning and cinematic film. Paul can tell the story of your day from the morning with the bride getting ready for her big day, through to the first dance. Paul makes sure he films only a select number of weddings per year, so he can really work on making a perfect film for each couple.

You only have one wedding day, you only have one chance to capture those memories live on film. Don't miss out on capturing those vows, the people laughing and smiling and your Dad saying some memorable things about you in his speech, something that photographs don't offer.

As weddings videographers based in Manchester, Paul and his team cover the North West of England, with the majority of weddings filmed in Manchester, Cheshire, Lancashire & Liverpool, although we are more than happy to travel around the UK (or even further afield!). Take a look around the site, watch some of our films and get in touch with Paul via email or phone to arrange a consultation to put together the perfect wedding film for you.

Leave your review of Wedding Films by Freezeframe 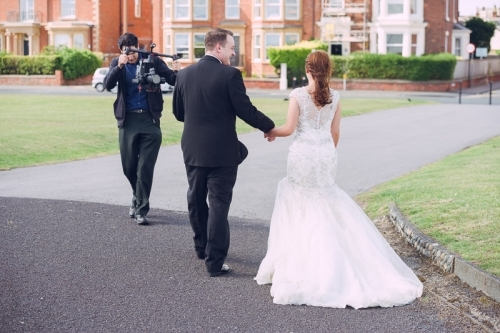